Home ➣ Villages of the Axarquia

The Villages of eastern Málaga

Location of eastern Málaga in Spain

Málaga is a province within Andalucía, which is an autonomous region in the south west of Spain. It has an ancient history both in the recorded past, from the Phoenicians, Romans, Vandals (from where it got its name) and the Moors, and in the prehistoric, with the first hominids entering Europe from across the Straits of Gibraltar; indeed, some of the earliest known paintings are found in the Caves of Nerja, which you can read about here.

La Axarquía is the name given to eastern Málaga, stretching from the outskirts of Málaga city to the eastern most town of the province, Nerja. Its name originates from the Arabic word for the east, ‘sharquiyya’. 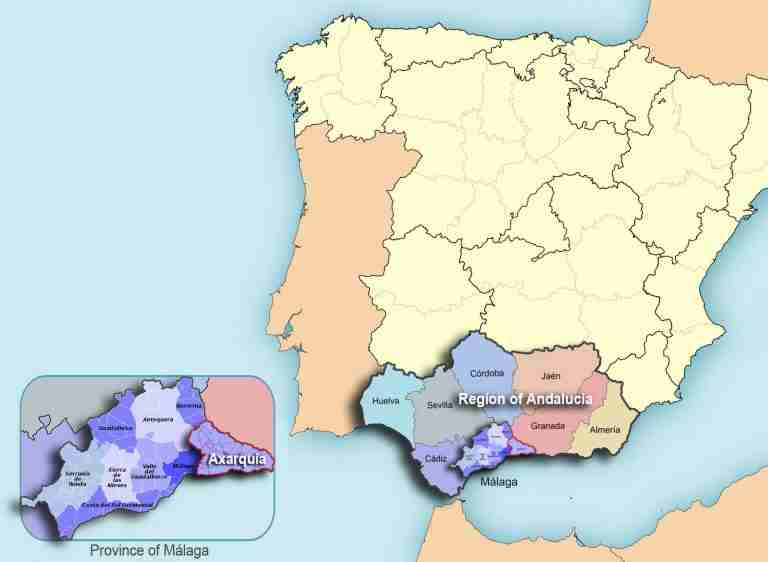 There are few towns east of Málaga, mostly the region is composed of small, so called ‘pueblos blancos’ or white villages, straddling the seashore or nestling among the hills and mountains inland. Vélez-Málaga, the capital of the region, along with Torrox and Nerja, are probably the largest.

The first settlements in the Axarquia go back to prehistoric times, then later came the Phoenicians, the Carthaginians, and the Romans, but most important for the history of the area was the domination by the Moors for 700 years. Many of the villages that are dotted around the olive, almond and vine planted hillsides date from this era – something that is quite evident from their Arabian style architecture, white-washed houses and narrow, winding streets.

By contrast, the villages down on the coast, sometimes as much as 2000 feet lower than those inland, are quite cosmopolitan, offering the tourist all the modern amenities they would expect.

Your guide to the villages

Map of the region