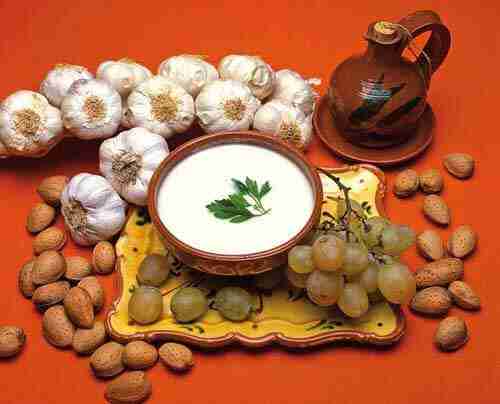 Ajoblanco is a  type of Gazpacho or Almond soup. White in colour, rather than the red associated with Gazpacho from tomato and peppers.  Ajoblanco is made from garlic and almonds, which give it its pale creamy appearance. The ingredients are crushed in a pestle and mortar until they becomes a paste to which cold water is added. The final touch is provided by a few grapes. 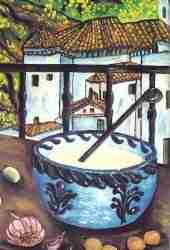 This soup is probably of Arabic in origin. The Arabs  are known to have introduced the technique of making pastes for soups using a pestle and mortar. However, Ajoblanco  soup is also very similar to a recipe prepared by the Romans. The dish also has its roots in poverty, given that it uses basic ingredients, readily available to the poor peasant, working on the land. With imagination, these simple ingredients were turned into a highly nutritious and filling meal. The soup was probably a precursor to the better known red ‘Gazpacho’ which would have developed after the introduction of tomatoes and peppers from the New World of the Americas.

Despite its ‘basic’ beginnings the Ajoblanco soup has continued to maintain its popularity amongst the Andalucian people. So much so that Málaga born poet, Alfonso Cannales  expressed his love for the dish in a sonnet ‘ ‘Take twenty peeled almonds and four cloves of garlic add the gift of a few saturated bread crumbs from a loaf of round bread.’

Another famous Málaga writer Enrique Llovet has his own recipe and said that in some places melon balls are also added and that Ajoblanco should be served in the bowl in which it is prepared.

Even world famous Spanish chef, Ferran Adriá has developed his own recipe for this simple Andalucian dish, serving it to the rich and famous at the the renowned ‘El Bulli’ restaurant. A far cry from the humble origins of this simple peasant dish.

Yet despite the new additions of melon or croutons or even cherries, which have become more fashionable in the last few years, the traditional method of adding grapes is still preferred in the Axarquia region. Many Axarquian people would say that Ajoblanco is not the same without the garnishing of the Muscatel grape, the traditional grape grown in the region, which they say compliments the dish perfectly.

There are several fiestas dedicated to the ‘Ajo Blanco’.  A festival is held in Almáchar every year to celebrate Ajoblanco. 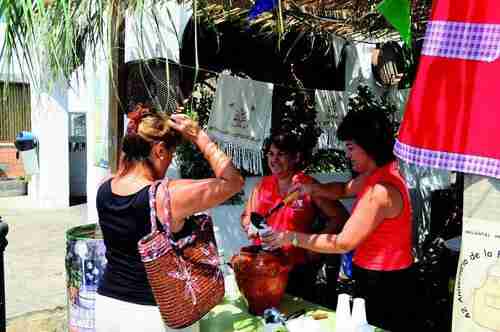 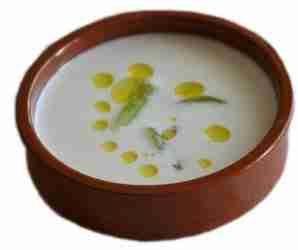 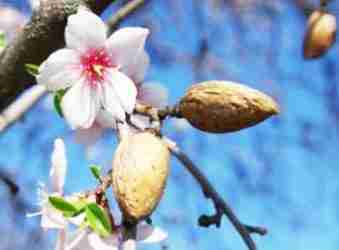 Spain is the world’s second largest almond producer, next to California. However the Almond tree  is not a native plant but was probably first introduced by the Romans.  The tree originated in Western Asia and North Africa. Similar to peach trees, almond trees made cynide poision with a bitter flavour to keep animals from eating their fruit. However by around 3000 bc farmers near the Lebanon managed to cultivate a sweeter almond. These highly nutritious sweet almonds proved popular and their cultivation spread to North African and the Mediterranean first by the Phoenicians and later by the Roman Empire.

The legend of the Caliph and the Almond trees 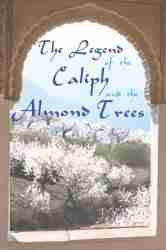 There is a legend that in the 11th century a Moorish Caliph, Al Mutamid planted the hills around Cordoba with almond trees as a gift for his beautiful and beloved wife, I’timad.  Apparently one wintry day snowflakes fell on Córdoba and watching this rare spectacle from the Palace window I’tamid burst into tears and sobbed that her husband was cruel to not provide her with such a lovely sight every winter. In response the Caliph ordered an army of gardeners to plant the hills around Córdoba with almonds. Every year after that the hillsides were transformed into white, just as his princess had asked for.  True or not, to this day the Almond blossom of Andalucia is a site to behold, a spectacular display of delicate white flowers, that adorn the hillsides, looking like freshly fallen snow in the spring.

Almonds are  harvested in October. Nets are laid out under the trees to collect the fruit and the trees are beaten with long poles to bring the nuts down into a nets.  Almonds are highly nutritious. Most are simply eaten as nuts, either raw or roasted, but they also feature heavily in Malaga cuisine, particularly in dishes of Moorish origin such as the sweet Turróns (nougat), made at Christmas or the hearty Ajoblanco soup.