Origins of the Fiesta of the Virgen del Carmen in Spain 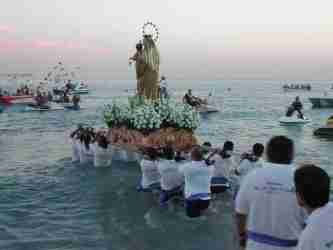 As a maritime figurine the so called ‘Reina de los Mares’, (the queen of the seas) protects fishermen and mariners.

On the 16th of July every year thousands of people gather together all along the Málaga coastline to pay homage to the Saint. Many of the processions organised on that day begin in the late afternoon, after mass. An effigy of the Virgen is taken on board a boat which has been decorated with flowers and lights. People throw white flowers into the sea, blow horns and sing to the virgin. They also shout ‘guapa’ (pretty) to her. Fireworks are set off and sometimes doves are released during the celebrations.

The story of ‘Stella Maris’ (Virgen del Carmen), goes back to Old Testament times when the prophet Elias, after having devoted her life to preaching, retreated to live in a cave at Mount Carmel in Israel. Many centuries later, hermits following Elias’ example of silence and loneliness, asked for the protection of the Virgen Mary of Mount Carmelo, which over time became Virgen del Carmen. 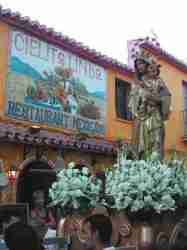 In the 12th century in England, Simon Stock (1165 – 1265), an elder of the Carmelite Christian Order, asked the Virgin for help to deal with difficulties that the Christian order was facing at the time. According to tradition the Virgen appeared to him on board a small boat and gave the priest a scapular (a ribbon worn by religious orders), saying “It will benefit you and all the Carmelites to wear the scapular until your death. Doing so, you will not suffer the flames of hell and you be be saved.” After this vision, Simon Stock wrote the well known hymn and prayer Flos Carmeli.

The Queen of the seas arouses great fervour among the people of the coastal towns of the Costa del Sol. In Málaga they even have a tradition that a sunken iron image of the Virgen remains under water all year, only brought to the surface by divers during the festival to receive the homage of her devotees. After 24 hours it is taken underwater again, as this is considered to be her natural place.

Many countries also know Stella Maris (Star of the Sea), as the North or Pole Star. Unlike other stars that appear to move due to the earth’s rotation, the North Star stays in one position. Seafarers in the ancient world therefore relied on it for navigation, and even today hikers are advised that if they’re lost they should look for the North Star to find their way back. In the same way then, the celebration is about reminding believers that they should look to Stella Maris for guidance.

July 16th is a day of celebration and joy for local people and as usual whenever a Catholic festival is celebrated in this region ‘espetos de Sardina’ and all kinds of sea food and ‘sangria’ are consumed in abundance.

It is also still widely believed that this ritual will increase fish stock and protect the fishermen from drowning. Many also believe in the cleansing powers of the Virgen, and that only after the 16th July will the sea water be clean enough to swim in.

52 year old Nerja fisherman Juan Bautista Bravo, has been taking the Virgen down to the sea since he was 25. He is one of the 12 men who every year proudly support 40 or 50 kilos each on their shoulders. “I do it due to my love of the Virgen. The only thing I ask from her is good health”, adding that “the best moment for us is when she goes into the sea, it’s very significant”.

51 year old fisherman Juan Antelo locally known as ‘el Caballo’ has also been part of the procession for half his life, “I have a lot of devotion, and I’m determined that on the 16th of July I never work.”

You can experience the Fiesta of the Virgen del Carmen in Nerja.