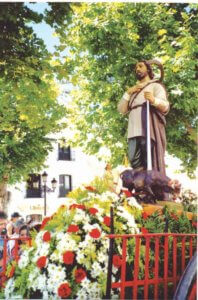 One of the Axarquia’s most stunning fiestas takes place on the 15th May. The festival celebrates San Isidro who is the patron saint of farmers.

This celebration is also known as a ‘romeria’. The term is thought to derive from the historical pilgrimages to Rome, but in this case the reward for reaching the destination is more down to earth than spiritual, with celebrations going on until the early hours.

But who was San Isidro?

The saint was born into a peasant family in Madrid in the 11th century and few facts are really known about him. Most of his story comes from an unreliable biography which was written about 150 years after his death. 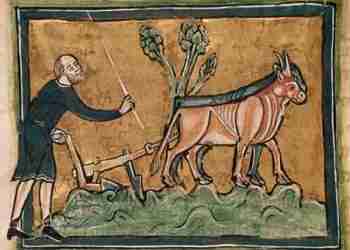 Isadore was a day labourer, working on the farm of wealthy John de Vergas at Torrelaguna just outside Madrid. He married a poor girl, Maria de la Cabeza. They had a son who died while still a baby. Isadore’s life was a model of simple Christian charity and faith. He prayed while at work and shared what he had, even his meals, with the poor. He often gave them more than he had himself.

He was steady and hard working, but a complaint was made against him to Sr. de Vergas that because he attended early morning Mass each day he arrived late to work. 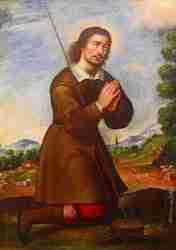 When confronted he said,  “Sir, it may be true that I am later at my work than some of the other labourers, but I do my utmost to make up the few minutes snatched for prayer. I pray you compare my work with theirs, and if you find I have defrauded you, gladly will I make amends by paying you out of my private store.”

Sr. de Vergas said nothing, but remained suspicious and one morning at daybreak hid outside the church. In due course Isidore appeared and entered the building, and afterwards when the service was over, went to work. Still following him, he saw Isadore take the plough into a field, and was about to confront him when, in the misty dawn light, he saw a second plough drawn by white oxen moving up and down the furrows. He ran towards it, but it disappeared, and he saw only Isidore and his single plough. 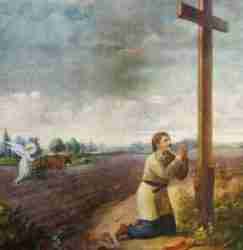 When he asked about the second plough, Isidore replied, “Sir, I work alone and know of none save God to whom I look for strength.”

Thus the story grew that Isidore’s faith was so great that even the Angels helped in his ploughing. He was a simple ploughman whose conduct was honest, pure and steadfast.

Forty years after his death, his body was transferred to a shrine and his cult grew as a result of miracles attributed to him. 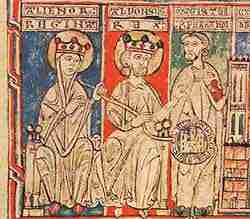 He is said to have appeared in a vision to King Alfonso of Castile in 1211 to show him a hidden path, which he then used to surprise and defeat the Moors.

Saint Isidore has been the Patron Saint of Madrid since 1212. In 1960 Pope John XXIII extended the patronage of Saint Isidore to all Spanish farmers and agricultural labourers in a papal bull and many villages in the Axarquia celebrate with a Romeria.

We would recommend seeing the Romeria San Isidro celebrations which take place in Nerja, travelling towards Maro. Read more on Nerja’s What’s On page.