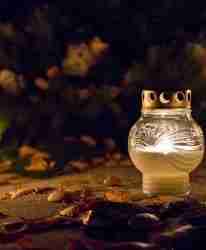 Todos los Santos or All Saints Day is a bank holiday in Andalucia. It is a day when Andulucians remember their dead, with many visiting their local cemetery, taking flowers and candles.

Halloween was originally a Celtic new year celebration going back some 2000 years, October 31st represented the boundary in the agricultural year between the abundance of spring and summer, (the harvest had also just been collected), and the dormant winter months. This sense of transition was also manifested in the belief that on this night the dead could invade the world of the living.

The Celts lit fires to ward ghosts away, however as Catholicism took route, it turned what was an act of fear into a day of celebration, Día de Todos los Santos – (all Saints day).

For ordinary people it was – and still is – a day to remember departed loved ones. Families go along to the cemetries during the day to pay their repects, clean and tend the graves, and put cut flowers (often chrysanthemums) around them. Occasionally one can still witness a vestige of the Celtic superstions – in the traditional placing of nuts and cake on the graves in order to bribe, and therefore fend off, evil spirits. 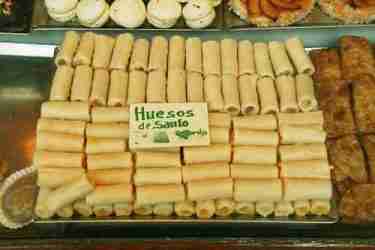 However, Dia de Todos los Santos is also a day when people enjoy eating delicacies like ‘Huesos de Santo’ (Saint’s Bones), and gather outside and keep warm by eating ‘castañas’ (chestnuts) roasted in a small bonfire or on a modern grill. In Maro, there is a festival in which this activity is a important part: Fiesta de La Castaña y el Boniato de Todos los Santos. However in recent years the festival has been given new life, merging with a Halloween celebration aptly called Maroween.

Huesos de Santo are sweets made from marzipan rolled into thick tubes, with various types of fillings (chocolate, desiccated coconut, banana, etc), in an assortment of colours that hint at what they contain. Originally the name Huesos de Santo (bones of the saints), derived from their pale yellowy colour after being baked with a syrup covering. This very sweet delicacy can trace its origin back to the time of the Moors, who of course introduced almonds to Spain.