Almáchar, the 'land of meadows' 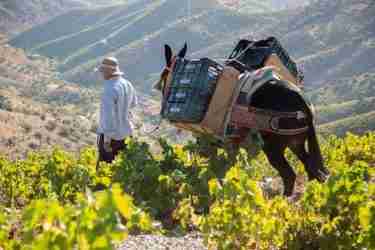 Almachar’s location between two rivers, no doubt gave rise to its Arabic name of ‘Al Maysar’, which means ‘the meadows’ or ‘land of meadows’. It is still good, fertile ground, and unlike the harsher slopes of the ‘Alta Axarquía’ the hills around Almáchar are gentle and rolling, dotted with vineyards, olive groves and cereal fields.

On this page you’ll find plenty of information to help start plan your trip to this lovely old Moorish village. (In fact it is so typically medieval that the narrow streets are impossible for the modern day car, so it is best to explore the village on foot!)

First there’s a little info on Almáchar, then there’s an interactive map which will give you directions on how to get here – from wherever you’re starting from! Also worth checking out is our handy guide which links not only to all of our Almáchar pages, but to all of the fascinating places to visit here. Further on, you’ll find a map guide of the Axarquia with links to all the interesting places to visit both in Almáchar, and the surrounding villages. Almáchar is 48 kilometres from Málaga airport (about an hours drive), and about 30 minutes from the coast at Torre de Benagalbón. With around 2000 residents it is more like a mini-town compared to some of the Axarquía pueblos, but it still has the Moorish ‘pueblo blanco’ (white village) feel to it.

Almáchar is situated in the heart of the Axarquia hills in a picturesque landscape dotted with small farmhouses, orchards and market gardens; and many of these farmhouses have the traditional drying beds for raisins, a product for which Almáchar is famous.

The pretty little medieval village of Almáchar gives visitors a chance to step back in time to see a labyrinth of whitewashed houses, perched one over another on narrow steep streets, typical of the Moorish era.

This haphazard layout arose because the first properties were on the banks of the river and then, over time, rose steadily up the sides – often using the house in front as the foundational support for the one behind. As a result one can easily get lost in this maze of streets that weave their way down to the river. However, with flowers spilling out from every balcony, patio and window box, it’s not a hardship!

Raisin capital of the Axarquía From time immemorial the life of Almáchar has revolved around the raisin, and it is impossible to think of the town without it.

Towards the end of August and beginning of September, the women from the village sit at their doors and pick the raisins from the bunches of grapes one by one – making sure that they keep the stem attached to preserve the fruit. The work certainly requires hours of dedication because this area uses more hectares for growing raisins that any other in Spain.

Farmhouses stand out on hillsides where the grapes are laid out to dry in the sun on distinctive sloping beds called paseros. The beds can be seen from afar and are an integral part of the local landscape.

This drying process goes on today in exactly the same way as it has always done for centuries – three weeks of cochura (drying), plantás (distributing on the floor), and turning on the paseros (mats used for drying). This is how Almáchar’s raisins have obtained their own Denomination of Origin. Almáchar is actually on a well-known, circular route known as the ‘Ruta de la Pasa’, (raisin route), a 62.5 kilometre long journey that joins up many of the traditional villages in the south-western part of the Axarquía. It is a celebration of the fact that there are over 3000 hectares of planted vineyards in the Axarquía. The journey begins in Rincon de la Victoria and then goes through the villages of Moclinejo, Almáchar, El Borge, Cútar, Comares and Totalán.

As the name suggests, the villages along the raisin route are known for their sweet Moscatel grapes, used predominantly to make sun-dried raisins and the sweet moscatel wine that Málaga is famous for. However, since 1556, Almáchar’s land has been, after El Borge, the largest producer of this sub-product of the Moscatel grape. 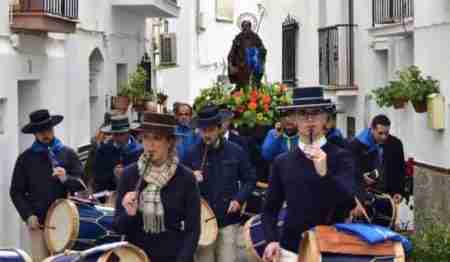 San Anton Fiesta, Árchez February 2019 This Sunday (3rd February) Árchez celebrates one of its most popular fiestas, San Anton – in honour of its Patron Saint. San Antón is also the Patron Saint of animals and many local people go along to the fiesta to get their pets blessed! For those without a pet

Want to find a fiesta?

The east of Málaga has many other attractions beyond its beaches!
Click Here

Looking for something to do?

The east of Málaga has many other attractions beyond the weather!
Click Here

Use the links below to explore what you can see and do in Almáchar, what festivals take place through the year, and to read about the area’s fascinating history. Almachar is a great base for exploring all of the Axarquía. From beautiful beaches, stunning countryside, pretty little villages, and a wealth of things to do, it has something for everyone – take a look below at all the places you can visit!

Just click on the map icons to find out more information or get driving directions.